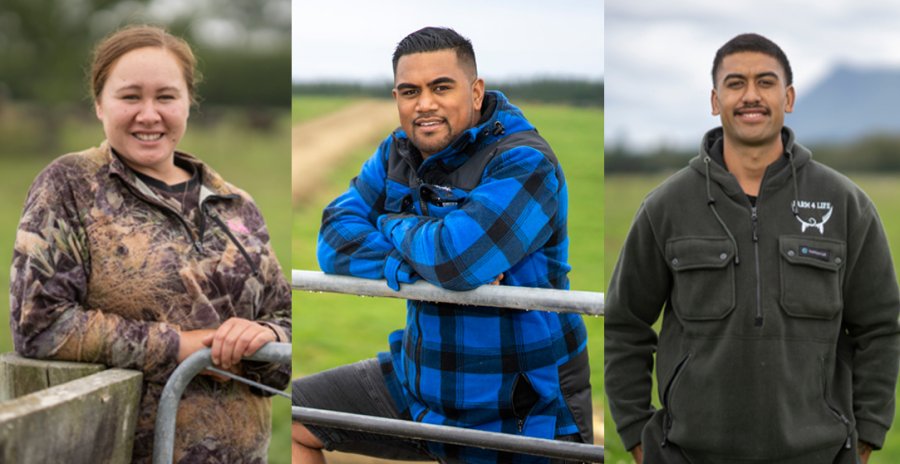 The Young Māori Farmer Award was inaugurated in 2012 and is designed to recognise up and coming young Māori in the dairy, sheep and beef and horticulture industries. This year the competition is for dairy.

The finalists in the 2021 Ahuwhenua Young Māori Dairy Award are:

Judge Aaron Hunt says the standard of entrants in the competition was very high and reflects the number of young Māori who are making successful careers in the dairy sector.

“The sector has natural appeal to young Māori because it offers an outdoor lifestyle and a significant career path. It is also good for those with young families and allows them to have a supportive environment in which to work. The judging panel found all the entrants passionate about the industry and enthusiastic about their future prospects,” he says.

The Ahuwhenua Trophy Management Committee Chairman, Kingi Smiler, says it is great to see another cohort of young Māori from the dairy industry entering this event. He says the Young Māori Farmer competition is very important both for Māori and the dairy sector because it helps foster a new group of potential leaders and role models for the future.

Since the award was inaugurated it has proven to be very popular and has attracted high quality entrants, many of whom have gone on to take leadership roles in the wider agri-sector. 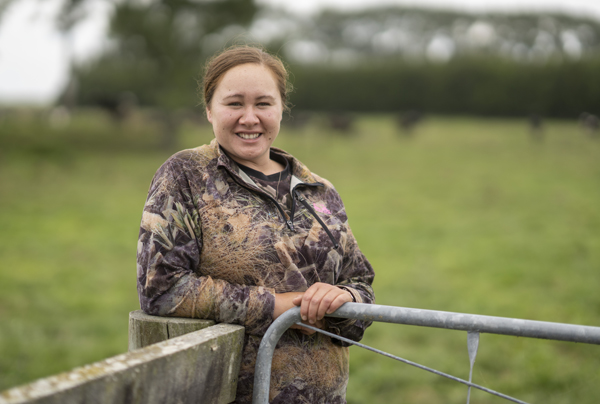 Twenty-five-year-old Anahera Hale is the 2IC farm assistant on Rod and Jacquie McPherson’s dairy farm near Whakatane. She’s been working on 100 hectares (94 effective) where they run between 340/345 cows and winter about 360 cows. The farm is system two where cows are just fed grass and get topped up either with silage or palm kernel.

Anahera says she loves her dairy farming career – especially the fact that she can work outdoors and with animals. But this pathway to happiness within the dairy industry has been a roller coaster ride for Anahera. She was born in Whakatane but says her whakapapa is from Te Araroa. She grew up in Edgecumbe and was raised by her Papa and Nan from birth, who she says provided her with an amazing start to life.

Anahera went to Te Teko Kohanga Reo, and later attended Edgecumbe Primary School where she indulged in her love of horses. She also loved the outdoors and was always out hunting deer and pigs or out gathering kai moana with her Papa.

It was at Edgecumbe College that Anahera became interested in farming and working or doing something with animals. She says at school the subjects which she thrived in were all hands-on subjects such as agriculture, horticulture, physical education and woodwork. Sport was also a big part of her life.

The death of her Papa caused her much grief as she had lost the biggest role model in her life. Some difficult times followed, and she went on a limited volunteer service run by the Defence Force to try and get her life back on track. Then the family home was destroyed by the Edgecumbe floods in 2017 and she and her Nan lived in a small cottage on a farm until their house was rebuilt. While living on the farm Anahera’s interest in farming was once again sparked and this led to her being accepted for a course in agriculture at Toi Ohomai the Institute of Technology in the Bay of Plenty.

With the support of tutor Rachel Nash, Anahera completed the course and also did part time casual work with Rodney, which later led to a full time job. Dairy farm life has given Anahera a new sense of purpose. She enjoys the range of tasks on the farm, and says she has learned that with hard work and motivation, anything is possible. As for the future she would love to progress through the industry and aim for farm ownership. Another thing she would love to do in future is going home back to Te Araroa to start rearing either sheep or beef. 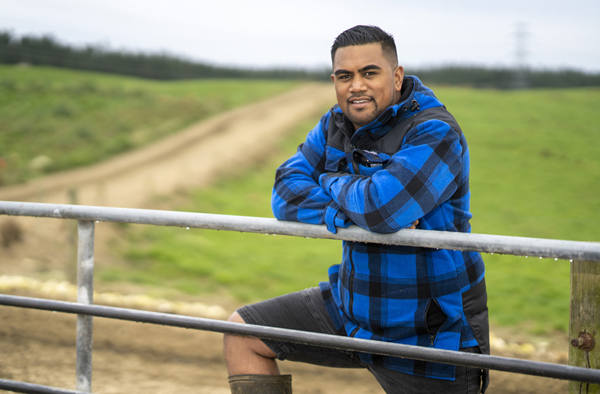 Ben, 26, is currently working as the 2IC for a contract milker at Trinity Lands farm, a 307ha (287 effective) property near Tokaroa in the South Waikato which runs 900 cows.

He recognises that the dairy industry has helped turn around the life. From an early age, Ben was presented with some significant challenges. He was brought up in Pukekohe and raised in an environment of violence, drugs, alcohol and gangs, and as a kid growing up just wanted to be a gang member like his uncles. This led him down the path of being in juvenile prisons and finally to the adult prison at Waikeria. He says at this stage he felt his life was over and he gave up hope. He says he never knew his dad and felt rejected, but finally met him in 2018, just three months before his father died. Ben also suffered from dyslexia which made learning hard.

Before spending time in prison he had no dreams of becoming involved in dairy farming. But while there he found a passion for farming and this progressed into dairy farming which he saw as a way out of the situation he was in.

Since obtaining a job on a dairy farm Ben has completed the husbandry and feeding course Level 3 through Primary ITO and is currently part way through the Level 4 course.

He says he’s a hands on person (a real tutu) and loves getting up early in the morning and being around animals. Ben says he loves being outdoors and enjoying the physical challenges of the industry and loves the opportunities that there are within the industry. He describes it as a great industry for people with backgrounds like his to positively progress their lives and to that end he goes back to Waikeria to talk to the men there and to encourage them to follow in his footsteps.

Ben says he likes the whole kaupapa behind the Ahuwhenua Trophy awards, especially how it focusses on Māori achievement and celebrates success as Māori in the dairy farming industry. He says his wife, children and whānau encouraged him to enter the awards and he’s happy he did so and already has met some awesome people.

Long term, Ben would like to own and run his own farm but at the moment his goal is to become a manager or a contract milker. 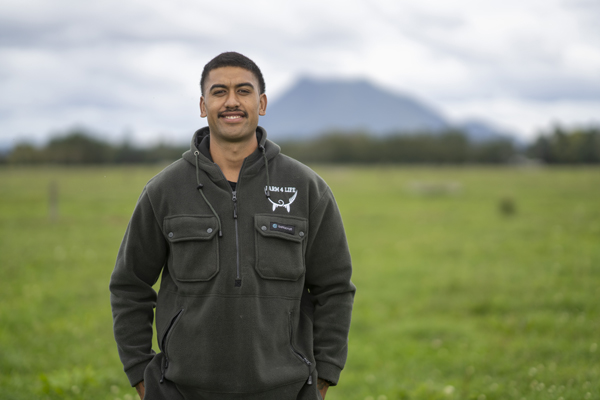 Quinn Morgan is very new to the dairy industry and is in his first season of farming working as a Farm Assistant for Sam and Kate Moore on their 155ha farm in Otakiri near Whakatane. They milk 570 cross breed cows through a 36 aside shed and are on system three. Eighty percent of the farm is irrigated.

Quinn, 26, was born in Taumarunui but lived in Tongariro National Park before moving to Whanganui, where he went to primary and intermediate schools. In 2007 he moved with his mother, stepfather and sister to Australia where the family sought out a new life. In Australia Quinn was involved in the fitness industry, working full time with at a gym in Perth. He played rugby and a whole range of sports and represented Māori in these all over Australia. While there, he married Samantha and they now have three children.

He came back to Aotearoa in 2020 with his suitcases and dream of getting a job and making a better life for his wife and children. They waited patiently for six months in Perth until he got a job. His farming career began when some of his relations offered him work experience and that’s when he fell in love with the dairy sector. This led to him being employed full time as a farm assistant with the Moore’s.

Since then he’s completed day courses such as, Calving Smart with DairyNZ, First Aid For Cattle with Bayvets, Lameness Course with Dairy Hoofcare Institute. Quinn is currently wrapping up his Level 3 with Primary ITO and Starting his Level 4. He’s a member of the Farm4Life Education Hub, and has registered his interest for the Fed Farmers Leadership Course. Quinn has also entered the NZ Dairy Industry Awards. Meanwhile, wife Samantha is studying a Diploma in Agribusiness.

He say he always wanted a career that would involve his wife and family and dairying has done just that. He says the dairy lifestyle suits him especially being home for breakfast and seeing the kids head off to school. Quinn likes the early morning starts and the hard work.

He says working in the dairy industry is a real treat and as a young father has given him stability and helped him and his wife develop great aspirations as a collective. More good news for next season as he’s been offered a Sole-Charge Management Position for the 2021/2022 season with the same employers. The couple will head to Galatea on a 95ha farm with 280 cows this coming May. Later on, he hopes to go contract milking. 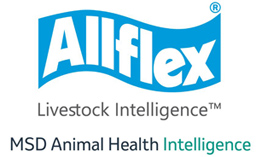 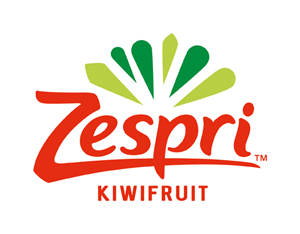